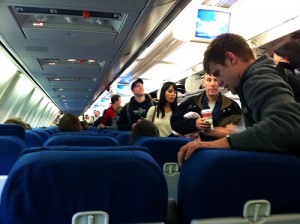 Paul and I love traveling, so we’ve made it a priority to fly to many destinations together since college. While we’re still not experts at climbing over each other when we need to use the plane’s potty, we much prefer awkwardly stepping over one another to getting personal with other passengers. And we usually pre-load our laptop with movies and funny clips to watch to pass the time on each flight. So when a recent flight was canceled and we were squeezed onto an alternate and soon-departing flight, we weren’t thrilled that our seats were many, many rows apart.

“You take the computer.”

“It’s fine. I have magazines.”

“Are you sure? I can bring it back to you halfway through the flight.”

Paul won this round–so he’s kinder, but I got the laptop–and we headed onto the very crowded plane. Paul’s row was farther forward than mine was, and we did something pretty silly when we arrived at his seat. In spite of the flight from Paris to Bordeaux being a scant hour-and-a-half, we kissed goodbye.

As I sat in my middle seat, I got sad thinking about how the last time we had flown from Paris, Paul and I were engaged for just a few hours–and we held hands for practically the entire flight. And the flight was empty, a stark contrast to the packed plane we were now sitting in. A petite passenger came to claim the window seat in my row, and I breathed a sigh of relief, since I had sat next to a portly European (yes, they do exist) on the way here. But the person who would be sitting in the aisle hadn’t shown yet.

More and more passengers filled the plane, speaking in French and invading everyone’s personal space as they stowed their luggage and found their seats. Mystery aisle traveler still hadn’t shown.

Then, there was an announcement in French. I couldn’t quite understand it, but I thought I picked up the word closed. Next, that same announcement was made in English.
“The cabin is closed now.”

I looked to the front of the plane, and every passenger was seated–no one was roaming the aisles. Sacre bleu! The aisle seat next to me was left open–by my count, one of just three in the entire plane.

“Excusez-moi?” I asked a flight attendant in an accent that would make my past French teachers cringe. I promptly switched to English. “My husband is seated in a middle seat in row 11. Would it be possible for him to come sit next to me?”

“Ah, oui,” she smiled and took off to find him.

“His name is Paul!” I shouted after her.

When she reached his row, she asked, “Is your wife sitting in the back of the plane?”
Paul apparently nodded.

“There’s an available seat next to her, so you can go sit with her,” she explained.

Paul, perhaps stunned by our good fortune, didn’t immediately react, which led the flight attendant to add, “if you want…”

He laughed, collected his things, awkwardly stepped over the passenger in the aisle seat and seized the opportunity to relinquish his middle seat sandwiched between two strapping men to sit in an aisle seat–and next to his somewhat smaller wife no less.

I smiled so big when we were reunited; you’d think we hadn’t seen each other in days.
Paul realized he forgot his water at his old seat, so he had to–again–awkwardly step over the person in the aisle seat in his row to retrieve it. He promised he wouldn’t be back this time.

Of course, we would’ve survived sitting in separate rows, but I was happy it was Paul’s foot I accidentally crushed when I got up to use the bathroom.

Have you ever sat away from your significant other during a flight? Was it annoying or was the break kind of nice?