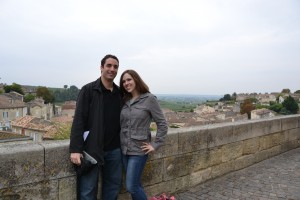 That's us in the medieval village of St. Emilion outside of Bordeaux, France

Obviously, parents-to-be have long to-do lists (choose a delivery location, buy a crib, build up a tolerance to being suddenly awoken at ungodly hours), but there’s at least one item you should take care of before you even think about tossing your birth control pills.

Everyone’s definition of kick-ass is a little different (though a staycation at your in-laws is not what I mean here). To Paul and me, who just got back from a pre-fertilization vacation (henceforth referred to as PFV), it meant visiting three European cities over 10 days and setting back saving for a downpayment-on-a-house a few months.

But holy crap, was it worth it.

It took us a long time to decide where to go–Rio de Janeiro/Buenos Aires? Amsterdam/Prague? Then, a friend, with whom we had visited Thailand last year (there’s a plane ride I’ll never do again!) invited us along to a festival in Barcelona with some of his friends. He had been to the city before and could vouch for its awesomeness, which helped make up our minds. Still, no PFV is complete without plenty of couple time, so we booked trips to a couple of nearby-ish cities we’ve always wanted to check out.

Our first stop was Seville, Spain (well, technically, our first stop was Barcelona to change planes, but we didn’t stay there long). I had been quite jealous of my Spanish-speaking college friends who got to study abroad here; it looked so incredible–and incredibly delicious–in pictures. It totally lived up to our expectations, though a days-long search for a heavenly-seeming dessert, churros con chocolate, was unsuccessful.

After two days in the hot, sunny city, we were on our way to our next destination: Bordeaux. Paul and I got engaged in Paris, and I studied French in school (not that I can understand a single word that comes out of fast-talking French folks’ mouths), so I was itching to get back to France. Plus, our favorite city up until that point had been Florence, Italy, largely due to its proximity to Tuscan wine country; Bordeaux’s well-known for its vineyards, so it seemed like a good spot. And it was–for me. Paul, though, wasn’t too impressed. We did, however, get to revisit Paris–against our will. Our original flight to Bordeaux was unceremoniously canceled, so we had a surprise layover in the city of lights.

And finally, we made it to Barcelona, where we shared an apartment near the city center with four guys. The multi-day festival, La Merce, added to the allure of the already-awesome city, and we had some pretty delicious tapas, not to mention the churros con chocolate I had been craving since Seville.

It’s amazing how being outside of New York City and not working long hours can make you more open to becoming a parent. And that’s in spite of the droves of overstimulated, overtired, and thus, badly behaved, little kids we encountered at every turn. Babies seemed more adorable, parents looked less harried, and having relaxed, sight-seen, and eaten as much as I did, I’m not as devastated about not taking a major vacation like this for a few years. There are still more things we want to accomplish before we take the leap into parenthood, but I’m glad we can check this one off our list.

Do you want to take a PFV? Where would you go if money were no object? Parents, did you take a PFV? How was it?