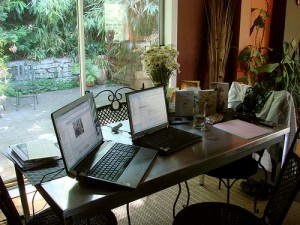 I don’t know if you heard, but there was this hurricane called Sandy in the Northeast earlier this week. Paul and I were two of the extremely lucky ones in New York–no damage to our home or car and we haven’t lost power. (But of course, we’re devastated by the images of destruction in our hometown of Staten Island and the other affected areas.) The storm had an unexpected side effect: forcing us both to do our separate jobs in our not-huge apartment for a few days (and counting), which made me realize some surprising things.

Truth be told, past weather events have had us working from home at the same time. But this was the first occasion we were both conducting business from our couch and dining room, respectively, for an extended period of time. And the thing that shocked me most: how stinking nice Paul is to his clients.

I know this shouldn’t be earth-shattering. Paul’s a sweet guy, in general (I wouldn’t have married him otherwise). Plus, his job–providing technical support to people who use the software his company makes–requires patience and friendliness. He goes beyond that, though. Every call seems to end with someone on the other line being extremely appreciative–I can tell because before they hang up, Paul says variations of “you’re welcome” multiple times and gives his impossibly adorable “I’m not totally comfortable with being complimented” giggle.

It’s funny to listen to the person you know so well do something they do so well to which you’re rarely privy. It’s especially funny because of the contrast between our jobs. I can go hours without talking to someone since I’m often engrossed in editing a story. And when I do make a peep, it’s usually a sigh or a growl (I’m part bear, didn’t you know?) because something’s frustrated me (I wonder if these noises slip out at the office–if so, sorry, people around me!). Paul doesn’t often have the privilege of complaining during work hours since it’s his job to be a people person.

Since he didn’t get all that many calls this week–not surprising since most of his clients are in New York and not working–I’d sometimes forget he was just a few feet away from me. And after spending 80 straight hours together cooped up in our apartment, I wasn’t too sad about going into the office yesterday (except I had a four-hour commute; and then I was sad). But it struck me how much I missed kissing him on the cheek on the way to grab a drink and being able to look up from my spot on the couch and see him at our dining table. While I don’t think I’d love working with Paul day in and day out, I do think the world might be a nicer place if we all had the option to see our spouses as often as we wanted during the work day.

Have you ever worked in the same space as your sig. other? Do you love it or loathe it? Is your guy’s work persona different from how he is with you?

Photo of an apartment much nicer than ours by edgeplot