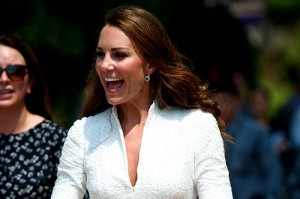 When my coworker told me that the Duchess of Cambridge was officially with child, I shrieked with excitement and immediately posted my most brilliant Facebook status ever: “royal baby royal baby royal baby.” Then, I put myself in Ms. Middleton’s very fancy shoes, and I felt sad for her.

First, the obvious reason. The mama-to-be supposedly has the worst case of morning sickness ever. Hyperemesis gravidarum, the pregnancy condition that few outside of the medical community had heard of, has kept Kate in hospital, as the Brits say. While I’m sure her digs are luxurious, fine linens and a lovely view can’t stop you from vomiting and worrying like crazy that your baby will suffer.

Next, the pressure to develop the perfect baby body. I’m convinced that Beyonce wore a fake belly during her pregnancy (remember those telltale images of a folded stomach while she filmed a TV segment?). That’s not to say I think that Blue Ivy isn’t her flesh and blood. It’s just that expecting moms don’t all grow round bumps. Since rumors were already abound that Jay Z’s main squeeze had hired a surrogate, Bey’s people likely thought it better that she sport a prosthetic tummy than go out in public not looking pregnant. If Kate’s midsection doesn’t morph into that ideal curve, she’ll either be forced to wear a similar piece (which actresses on the set of What to Expect When You’re Expecting told me make you very warm!) or remain inside the paparazzi-free palace walls at all time.

Lastly, she’ll likely have little say over her care and delivery. The gal got to make so few decisions for her wedding. And if gossip rags are to be believed, her own family couldn’t attend some wedding-related events because of their commoner status! Even if you too were pretty powerless during your own wedding planning, those making the decisions about your party probably wield no authority over your pregnancy choices. Not so with Kate. When you carry an heir to the throne, lots of people’s interests are at stake, and yours may be less important.

All that being said, I’m sure she’ll be on the best pain medication science has unearthed.

What are your thoughts on the royal pregnancy? Any gender or name predictions?

More About Having Babies
The One Thing You Must Do Before You Get Pregnant
The Best Before-a-Baby Advice I Never Got
Maybe to Baby: Lauren Realized She Was Less Not Ready for a Family