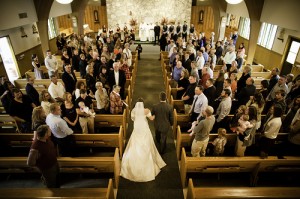 I love wedding ceremonies, but I wouldn’t have faulted any of our guests if they chose to skip witnessing our vows. Despite brides’ best efforts, ceremonies can be boring. (Besides, I’ve missed the temple portion of bar/bat mitzvahs–listening to someone in the middle of puberty sing in Hebrew at 10 AM on a Saturday can be downright painful.) But other couples want full attendance for the ceremony so badly, they may use this trick I just heard about to get them there.

The other day, my friend told me about a wedding he recently attended. The couple told him and his booze-loving friends that the cocktail hour would come before the ceremony, so the time stated on the wedding invitation was when drinks would start flowing freely. Not ones to miss out on an open bar, the group of guys were the most punctual they’ve ever been for a wedding. But instead of getting alcohol upon arrival, they got ceremony programs. The bride and groom had lied: The ceremony, as with most weddings, came first, and the cocktail hour followed that. They simply didn’t want their friends to miss their vows.

I’m a huge proponent of putting a start time on the invitation that’s half an hour earlier than the actual start time to give the punctuality-challenged a chance to get there. But I did feel badly when people told me they arrived half an hour earlier than the time I printed on the invitations–so they were hanging around for an hour before the procession begun. (I’m truly sorry.) Still, I would’ve felt way worse if people ready to party arrived under the false pretense that liquor promptly would be served.

To be sure, these men should’ve realized that cocktail hours before ceremonies are rare–few couples want to have tipsy guests in attendance when the officiant asks if anyone objects to the marriage. But because they were duped, they were pretty pissed off for the rest of the wedding…well, at least until they were drunk enough to forget about the ruse.

So while I admire this couple’s creativity to get their buddies to their ceremony, I don’t think it was the way to go. I got married outside under a long, narrow awning, so I wouldn’t have noticed a single late-comer. They may have gotten married in a church where the sound of heels click-clacking down the aisle is more disruptive, but you’re so in the zone during your nuptials, a little noisiness just doesn’t register. Meaning: There’s no need to resort to this tactic.

Would you use that couple’s lie to get guests to come to your wedding? What do you think of writing an earlier start time on your invites? Is that just as deceptive?