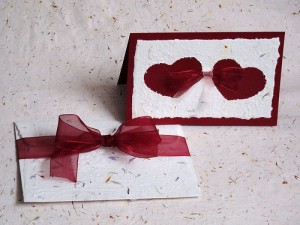 There are a lot of things wedding guests have every right to expect from the couple hosting the reception. That they’ll be fed enough that they don’t have to leave mid-wedding in a hunger-fueled frenzy to hit up a Burger King. That the conditions will be comfortable, as in an A/C is on if it’s 85 degrees out, the heat’s on if it’s 45, and if it’s outdoors, the venue isn’t infested with mosquitoes. That every effort will be made to show them a good time–so there’s music for listening and, with any luck, for dancing too. But there’s at least one expectation that I don’t have.

I would never hold it against a couple for not sending me a thank-you card.

Newlyweds are often at major crossroads in their lives. When Paul and I got married, I was switching jobs–which wasn’t unusual for me back then, but I literally had my last day at one place, had my rehearsal dinner the next day, got married, went on our honeymoon, and started a new job the day after coming back. On top of that, we were trying to buy our first home. We were going into contract on an apartment when we left for our vacation. Reality quickly set in upon our return when a voicemail from our lawyer informed us the seller had backed out. It wouldn’t have been so bad if we weren’t also getting kicked out of the apartment we were renting so our landlords could “move in their daughter.” Some of my friends got married and immediately relocated, one had never before visited her new town, as soon as they were hitched. Others had just lost jobs or were coming out of grad school and on the hunt for employment. So yeah, it’s a tumultuous time. I couldn’t take it personally if someone prioritizes getting her life in order over mailing me a greeting card.

Besides all this, brides and grooms are gracious at their weddings, thanking you–in person–for coming, serving you ample food and booze, and sending you home with a parting gift. That’s enough thanks for me, even if their lives as they knew it weren’t changing dramatically.

But still, I was downright embarrassed when our first anniversary had come and gone and we hadn’t yet written all our thank-you cards. One of our outspoken pals, who gave a too-generous gift, called us out on it. “I thought a writer would want to write thank-you cards,” he said. In my defense, Paul and I had agreed to split up writing duty–I’d take my side and he’d take his–and this pal was on his list. That didn’t change the fact that I felt awful that a great friend had felt slighted.

“I’ll do it for you right now, but I don’t have any paper,” I said (and I now always carry a mini notepad with me!).

He pushed a cocktail napkin in front of my seat at the bar. I whipped out a pen (because I did always carry one back then) and got to writing what he deemed to be a heartfelt enough note to keep in his wallet wherever he went for a couple years. And then he lost the wallet, but that’s beside the point.

The point is, if I asked for a thank-you note from a couple who didn’t send me one, I know I’d get a message of genuine gratitude because they had already expressed it through the grand gesture of including me in their festivities. So I don’t need written proof. But anyone who does and didn’t get it from me and Paul, just let me know. I’ll even break out the good stationery.

Do you think thank-you cards are necessary? Would you get offended if you didn’t receive one?