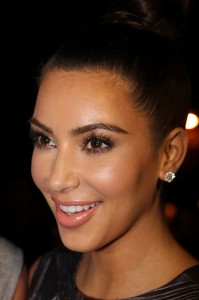 I had lots of wishes for 2013: that there be an end to gun violence. That global warming slows down enough so countries stop melting. And that Kim Kardashian doesn’t get hitched again. Why do I care about that last one? A 72-day-long marriage makes the institution look like a bad joke. When I heard on the last day of 2012 (happy New Year, btw) that she was procreating with Kanye West, who by all accounts seems to be the world’s most conceited human being, my reaction was to shout “Nooooo” in slow motion, like a person just pushed from a building in a movie might. But I’m rethinking that response.

Celebrity kids have pretty good lives. These pipsqueaks are pampered, and no expense is spared to keep them happy and healthy. True, being stalked by paparazzi doesn’t seem like fun, but it’s so normal to famous children that they don’t seem that fazed by it. While I don’t think spoiling the pre-pubescent set turns them into such great adults–and the Kanyashian offspring will surely be spoiled–I also don’t think that little ones need two happily married parents to grow up well-adjusted.

Plus, any Kardashian progeny is surrounded by people all the time. I’d like to believe that most of these folks care about the well-being of the mini money-maker, even if their other life decisions are questionable. To be sure, this child will likely not see one parent or the other for stretches at a time, but he or she will probably feel loved–in songs and fashion lines dedicated to him or her and the traditional ways too.

I obviously think choosing the person with whom you create life is an important decision, but I think it’s possible to know someone would make a good dad before you’re sure you want to be faithful to that person for the rest of your life–and that he’ll do the same for you. And I appreciate that Kim may be taking a little more time to make that last decision after her recent debacle of a relationship. So if marriage or a baby had to happen for her in 2013, I vote baby. I just hope that this child is afforded some stability…and that the money the parents inevitably get for selling those first precious pictures goes to a deserving cause.

Am I crazy to think it’s better to involve a child in this quickly serious relationship than to take it to the altar? Are you excited for another Kardashian baby? Or do you wish that whole klan (as in Kardashian clan, not Ku Klux) would go away?