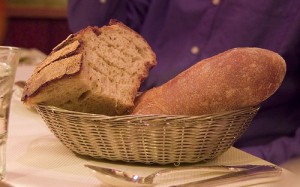 Despite our very different careers, Paul and I were neck-and-neck with our salaries since we joined the workforce in 2004. Until last year.

Thanks to a new job and a steady freelancing gig, I was ahead. And I liked being ahead. As much as I wanted Paul to advance at his company, if someone in our relationship had to be earning more, I was glad it was me.

Maybe it was satisfying because I’m expected to earn less. Besides being a woman in a country where my sex earns about three-quarters of what men earn, I also chose the not-so-lucrative career of magazine publishing. So to seemingly overcome those two obstacles–even if it was only in comparison to my husband–felt like a coup.

After eight-and-a-half years at basically the same company (Paul left his first job after seven years, and that second company merged with his old one, leaving Paul back at his same exact desk…and not much opportunity to advance), Paul got a nice job offer elsewhere. And as a result, his salary burst ahead of mine. I even got a raise last week, and Paul is still making more.

It really isn’t a competition. In fact, it doesn’t actually matter. After all, we have only joint accounts, so every dollar is shared and a salary bump for one of us is a win for both of us. But I’ll likely never out-earn Paul again, which makes me a little sad. I liked that the odds were stacked against me and I was coming out on top, especially since I was technically worth more than someone who’s so brilliant at what he does. Even better, Paul wasn’t at all threatened by my extra earnings.

Being the wife of a successful guy obviously isn’t such a bad fate. Plenty of women seek out that very life! But I’d feel more accomplished if I were the one bringing home more bacon. Not that I eat bacon.

Is there a breadwinner in your relationship? Do you care who comes out on top?

More on Marriage
Attention Married People: Don’t Pose for a Photo Like THIS
Surviving Working from Home Together
Marriage First: Not Sitting Together on a Flight