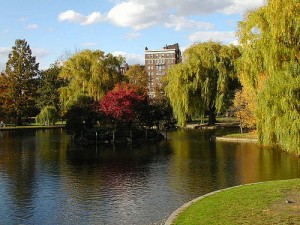 Mere blocks away from the chaos and carnage that marred the annual Boston Marathon, a more serene scene was the background for a very special wedding for two runners. As Buzzfeed reports, a pair of athletes, who got engaged at the Chicago Marathon last October, planned their nuptials immediately to follow the Boston Marathon long before anyone had any inkling that a tragedy would take place there. Less than four hours after dual explosions rocked the Back Bay, Kelli Johnston and Robert Watling tied the knot in their running shoes in Boston Common. The couple thankfully had completed the race before the bombs detonated.

I know what you’re thinking: How could they go through with their wedding after scores of people were injured, many losing limbs, a few losing their lives? I asked myself that same question. More confusing to me: Boston Common (the pretty setting in the photo above, unless that’s the Public Garden next door–they’re fairly indistinguishable to non-natives) is a short walk away from the section of Boylston Street where the explosives went off, so sirens inevitably provided the soundtrack for the ceremony.

While I can’t begin to know what choice I would’ve made if my own wedding were scheduled to come after an attack so close to the ceremony venue, it’s events like this that remind us how important our loved ones are. Having gone to college in Boston, news of the event prompted me to contact my friends who live there–some shared that they were safe before I had a chance to reach out. Thankfully, everyone was okay–or will be (thinking of your sister, AL). Still, when Paul IMed me to say he was leaving work for the day, waiting to meet him at home was just too long for me; we met at the train and rode the subway together.

So I don’t blame those two runners for celebrating their love as they had planned, in spite of what transpired a short distance away. If anything, being that close to losing each other makes solidifying your union all the more significant.

Would you keep your wedding plans if such a tragedy took place hours before you were set to get hitched? Do you think these runners made the right decision?