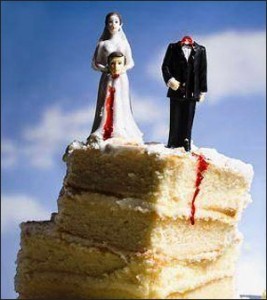 While we were planning our wedding and for the couple years after when my livelihood depended on writing for brides, I watched a lot of wedding TV shows, including the weekly train wreck known as Bridezillas. These days, I’m more likely to flip to HGTV on a weekend morning to catch house-hunting shows. Today, though, when Love It or List It went to commercial, I changed to We TV (hey, I get to watch this stuff only when Paul’s sleeping—I’ve got to take advantage!). And while what I saw shouldn’t have surprised me, it made me sad.

This particular episode of Bridezillas: Where Are They Now must’ve been a bit older because I recognized every single couple on the show (no, I’m not proud of it). I got to relive the emotional—and sometimes physical—outbursts, the abuse these women inflicted on their fiances and friends, and the confusion I experienced when I just couldn’t figure out why they were getting married in the first place.

As it turned out, the vast majority shouldn’t have. The editors cleverly focused on the moments in which those brides wondered aloud about that same thing, right before slapping a bright-red “DIVORCED” stamp over the couple’s faces, with the requisite accompanying thud sound.

Whenever people take marriage lightly, it irritates me. It’s not a right that everyone in this country has, so those with the privilege should consider it one. To see that these couples spent months bickering over a party just to throw away their relationship upsets me.

What’s more upsetting: how the show revels in these splits. “With more breakups than ever before!” a cheery female voice-over announced at the top of the show. Yeah, I know it’s reality TV’s job to make you feel better about your own life, but being on the show likely contributed to the ridiculous actions these women took—and perhaps even the post-wedding separations.

On the flip side, some of the relationships have endured, and somehow, that restored my faith in humanity. One particular bride, once an overly dramatic, thin blonde who more often cried to get her way than reasoned with those hampering her happiness, was now an overly dramatic, overweight brunette. And while I weep for the baby daughter she’s brought into this world, who’s already being pressured to hit milestones early, it warmed my heart to know that this woman’s groom was still by her side and that televised explosive arguments couldn’t tear them apart.

In one commercial, I found out that this season would be Bridezillas‘s last, a piece of information that made me feel old and a teensy bit sad. Then, I thought maybe this is a good thing. Maybe today’s brides know that tending more to the wedding than the relationship is the mistake that has doomed their predecessors, and the producers have been having trouble tracking down willing participants for their program. But weep not for the fallen show, my friends. Marriage Boot Camp: Bridezillas, featuring that bride-turned-mom-and-wife and four other former Bridezillas, premieres on May 31st, which just happens to be the day of my and Paul’s five-year anniversary.

Does it surprise you that most couples profiled in follow-up shows to Bridezillas didn’t last? Do you think brides are moving away toward acting heinously or are people just sick of watching brides behaving badly?