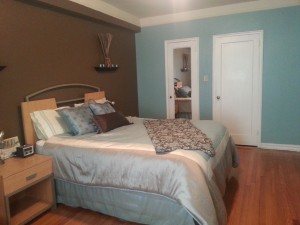 That's really our bedroom! But it's only that clean because our apartment is for sale.

I never thought it would happen to us. In fact, when I heard about couples who slept separately, I assumed their marriages were doomed.

But I kind of don’t mind sleeping apart! Here’s how it started:

Paul hurt his shoulder–badly–back in May, and since then, he’s comfortable only when he snoozes on his back. Unfortunately, back-sleeping is also the position in which he’s most likely to snore. Worse, his snores are so loud you can hear them in the hallway outside of our apartment (I tested yesterday).

Since I wasn’t getting much sleep, I was getting sick. Paul took notice. Although he always returns to the living room after he lies with me in our bedroom, waiting for me to fall asleep, the other night, he didn’t come back to our room.

I never slept more soundly in my adult life.

I told him so in the morning. Sure, I was upset to see that he spent the night on our couch, but I was so well-rested that the sadness took a backseat to how great I felt. Then, Paul offered to stay on the couch each night. As much as I wanted to take him up on that gracious offer in that moment (lest he change his mind), my heart hurt.

“Do you sleep okay on the couch?” I asked, assuming our sofa wasn’t nearly as cozy as our exceedingly plush mattress.

“Better there than in the bed,” he admitted, “because no one’s kicking me and yelling at me to stop snoring.”

The night before and of his birthday last week (I can’t believe it’s been a year since his I had to keep that big secret from him!), we went to sleep together in our bed. The snoring was a reminder of how lucky I was to have my husband next to me.

But I didn’t protest when he offered to stay on the couch when the workweek started.

Admit it: Have you ever enjoyed sleeping apart from your significant other? Or would you be devastated if you didn’t share a bed with each other every night? (I thought I would be!)

More About Married Life
Marriage First: You’re the Only Couple Without Kids
How Meeting Other Couples Is Like Meeting Other Singles
Can You Ever Spend Too Much Time with Your Spouse?