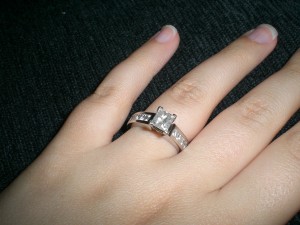 And a 7th: Don't text a picture of your engagement ring to people who neither are invited to your wedding nor ask to see it. It says, "I don't like you, but I want you to know that I have a diamond."

People understand when you can’t invite them to your wedding. With the exception of a house and your children’s college education, your reception is the single most expensive thing you’ll ever fund. But just as there’s a code to which your acquaintances stick (or should stick) regarding what they can and can’t say to you, the bride who’s not inviting them, there are some unspoken rules to which you should adhere–like avoiding these things.

1. Including them on your engagement announcement.
Whether you send a text, an email or a Facebook message, there’s a reason you’re choosing the people with whom you share your happy news–and not sending a note to everyone in your contacts list. It’s because you’re close-ish with them. And people who are on the borderline for getting on your wedding guest list may assume they’ve made the cut if they learn you’re betrothed from a personal note from you. A better way to spread the word: Post on your social network of choice without tagging specific folks (after you’ve alerted the people in your inner circle, of course). Most Facebook buddies know when you’re not actually friends.

3. Going too much into detail when they ask about your wedding.
When an acquaintance asks, “When/where are you getting married?” the answer they’re likely looking for is “this fall in Vermont,” not October 22nd at 4 PM at Great Lodge in Burlington, Vermont (I’m making up this location; don’t bother Googling). When you give them a precise time and place, they may assume it’s your way of telling them to save the date. Psychos like me may press for more info because I love talking about wedding specifics, but normal people care only if they’re invited.

4. Admitting that your wedding will be big.
Even if you’re expecting 300, don’t ever let on that your guest list is as long as Rapunzel’s hair to someone who may suspect she’s invited. She’ll think, “Surely, I’m in the top 300 people this bride knows!” And while she may very well be, every couple learns that a large percentage of people at your party are there because your parents demanded it. The person to whom you’re speaking may not realize this and will then take offense thinking that there are 300 others’ company you prefer over hers.

5. You go to her wedding.
All things being equal–and those things include guest list size, budget, and friendship strength at the period of time you each tie the knot–attending someone’s nuptials before your own makes that couple believe they’ll watch you get hitched. If you’re invited to a wedding and there’s no chance in hell you’ll reciprocate the invite to your similarly sized/funded affair, decline. You’re going only for the free food and booze and not because you give a crap about those people.

6. You tell them they’re invited.
It should be a no-brainer, but it’s not: Don’t guarantee anyone a seat at your wedding until you’ve stuck their invitation in the mail. Hell, I made this mistake because I didn’t realize I’d have to change to a more expensive venue four months before my big day–and cut my list of people I wanted to attend. When someone assures me I’m invited (never after my prodding, for the record), I make sure they know it’s cool if they wind up changing their mind. Still, you’re better off not promising anyone except your nearest and dearest because things change.

How else do brides make their acquaintances think they’re invited to their weddings? Has anyone ever done any of the above to you?