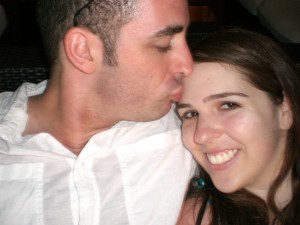 I puked my guts up two hours later.

Don’t get me wrong; I loved my honeymoon. There was plenty of romance to be had as we did nothing but lay on the beach, eat so much that my cute honeymoon clothes were snug by day 3, sleep 10 or 11 hours a night, and repeatedly engage in that other thing all honeymooners do as if they won’t be sharing a bed when they resume living in reality. Still, we, and some of our friends, have encountered some less-than-romantic surprises for which it’s worth mentally preparing.

1. Outdoor showers are a logistical nightmare.
So your honeymoon resort boasts luxurious showers that make you one with nature. What could go wrong? Well, when I bathed in our outdoor stall, the curtains around it blew wide open with every minuscule gust of wind. This wouldn’t be a problem if we were completely secluded, but the next bungalow over had a full view of naked me if they bothered to look. Also, outdoor showers are like magnets for the creepiest, crawliest bugs known to man.

2. Deserted islands aren’t known for food safety.
Our resort was fairly top-notch. In fact, it was so pricey, we stayed only six nights because it was all we could afford at age 25! Despite that, the fresh tree melon juice at breakfast or the still-squirming catch of the day at dinner just may make you sick. I had a 24-hour case of food poisoning that left me stationed for hours beside the posh porcelain bowl. And no matter how much you love each other, there is nothing romantic about the runs or vomiting.

3. You’re at the mercy of the airplane gods.
Unless you’re driving or training to your destination (which have their own share of issues), you’ll have to fly to and from your honeymoon. This means you’re subject to flight delays, claustrophobia-inducing seats, terror-inducing bathrooms, and, if you’re as lucky as Paul and I were on our five-year anniversary trip to Costa Rica, lost baggage. And if you don’t book far enough in advance, you may not get to sit next to each other. Fun!

4. You may want to try separate activities.
One spouse’s idea of heaven, say, a samurai museum during your Japanese honeymoon, might be the other’s hell. To get the most out of your trip, especially if you’re in a country you’re not likely to visit again, you’ll want to check out these regional offerings, even if it means parting ways with your partner for a day. Of course, your eventual reunion would be xoxo-filled, and learning the history of samurais, if that’s your thing, would be wonderful, but romantic? Nah.

5. You may get sunburn.
Put pale people in sunny destinations, and no amount of SPF can stop skin from turning red. And you know what’s painfully unromantic? Sleeping in a bizarre position so that the bed doesn’t irritate your sunburned back or arm or leg. Been there. Burned that.

6. You WILL check social media to see your friends’ wedding pictures.
And you WILL get an IM from your mom wanting to know about the flight, the food, and pretty much everything else to ensure her that you’re safe and happy. No matter how much you love your mother, nothing kills the mood faster than speaking to a blood relative.

7. Jetlag sucks.
If you’re flying out of your timezone, you may experience that uncomfortable, almost inhuman too-tired-to-function-but-don’t-want-to-waste-a-minute-of-the-trip feeling. Getting ready to go out for the evening when you’re usually sleeping. Steak when you’d normally eat breakfast. It makes you feel so off-kilter that sex and snuggling aren’t on your mind. With any luck, you’ll feel jetlagged only on the way back…when you have to return to work where sex and snuggling aren’t options anyway.

What other un-romantic things might one experience on her honeymoon? Any of the above seem romantic to you? I don’t know; maybe you have a vomit fetish!