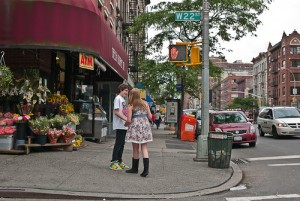 As anyone who’s read more than a single post of this blog knows, Paul and I started dating when we were 13. Since childhood sweethearts are so rarely in the news, my fingers couldn’t type fast enough once I stumbled upon a certain somewhat offensive Canadian study.

Full disclosure: I haven’t read the whole study. And even if I had, I probably would be too dense to fully understand the methodology.

Their findings from checking out a 698 students (there were more people in my high school class), who likely self-reported: Kids who couple up at 11 1/2 are more likely than those who wait to date to do things like practice unsafe sex, drink booze, lie, cheat, run away, pick fights, and cut class.

Even though I didn’t have a serious boyfriend until I was 13, I had “boyfriends” beginning at approximately age 11 1/2. Was I emotionally ready to be in a romantic relationship at that point? Hells no. But the fact that I kissed a boy during Spin the Bottle at Jewish day camp and accepted his invitation to be exclusive later that day had absolutely no bearing on whether I would engage in risky adolescent behaviors York University researchers have found that I should have–and didn’t, unless you count the time I threatened to take a bus to my grandma’s apartment with my little sister in my suitcase (but that was before I hit puberty).

That’s not to say that the researchers didn’t find what they did. I just doubt that they controlled for influences like Jewish day camp, where counselors practically coach their goody-two-shoes campers to hook up. Even the baddest egg I remember from Jewish day camp, the guy I “dated” for a few weeks when I was 12 who became a full-fledged pothead by 15, is now a clean-cut Manhattanite, who “loves cruising with his wife,” according to a Google search. Hide your children, parents.

On a more serious note, thinking the worst of young daters especially irks me because I was physically an adult at 10 1/2. Embarrassing as it is, my body hasn’t changed much at all since I was 11. Although hormones were shouting at me “DATE BOYS NOW,” they weren’t also telling me, “LIE, CHEAT, SKIP SCHOOL!” Kissing a few boys at camp doesn’t turn a kid rotten.

Perhaps I have more problems with the Daily Mail article about the study more so than the research, itself, namely this line:
“And reassuringly pupils who had high academic grades were more likely to be late bloomers.”

REASSURINGLY?! Oh, thank goodness students at the top of their classes weren’t holding hands with anyone! I feel so much better knowing that only those with lower test scores do such a thing.

Instead, I’d like to offer some real reassurance to parents of 11-year-olds who have begun dating: They may go on to do things like earn college scholarships from top universities, take jobs in the fields of their choice, and find kind, loving partners who make them happy.

Do you think 11 is too young to date? What do you consider dating to be anyway?

More on Love and Marriage
6 Things Not to Say to Childhood Sweethearts
Surviving Working from Home Together
Marriage First: Not Sitting Together on a Flight